Two roofing courses were recently run at 16 King Street, Bristol which is, by the way, now also the registered address of the National Heritage Training Group. The first course was Regular Hip & Valley Roofing and the second course took this to a higher level with Advanced Roofing – Theory and Practice. These were both level 3 & 4 courses run by Alan Creasey who has a lifetime of experience in both contemporary and heritage roof construction techniques. A further advanced level course is planned for later in the year which will be a step-up to Complex Roofing. Alan also covers the history and development of roofs from Norman times onwards and infuses his delivery with many quirky historical facts and anecdotes which combine to make this course more entertaining than you might imagine it could be! 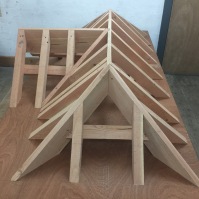 I have many years of experience of post and beam carpentry and also site carpentry and one of the most demanding elements of the craft for many people is the understanding of Euclidean geometrical theory applied to the construction of traditional roofing. For me the first course was a refresher in the setting-out of hips and valleys on regular roofs but it was also aimed at others in the group who had no experience of this type of roof layout. There are many books on the subject illustrated by many accompanying diagrams but they are no substitute for a course such as this where, as a group, you can work together under expert guidance to demystify some of the complexities involved.

The first week comprised theory sessions which investigated the mathematics of the trigonometry used in calculating the angles and lengths of the main roof timbers. This cumulated in a summary table of information which could be used to cut the roof in the workshop or on-site. With this information we went on to build a scale model of a hip and valley regular roof with a dog-leg gable feature.

During the second week we applied similar albeit more complicated geometry to the construction of a regular pentagonal 1.25 spire with jacks and purlins. To give some perspective the hips of our model were around 1.6 metres long.

I would certainly advise completing the first course before embarking on the advanced course. This point was also emphasised by the tutor who clearly understood that during the first week you develop a good basic grounding in the geometry and in the second week you build on this knowledge – with the assumption that you have grasped the geometry and the pace is a little quicker.

These courses are becoming rarer due to the commitments of the current tutor but if you do get the opportunity of getting your name down for the next ones I and many other fellow carpenters who have done it would recommend that you do so in order to increase your confidence and ability in this specialist area. Courses are advertised on the Carpenters Fellowship & Oak Frame Training Forum websites & social media.